Catch up on what's hot and what's not, out there in Swingers Party Land!  Hot off the press:  'SDC hosts the Soft Opening of Trapeze Club in Philadelphia'  PA on Friday, March 23 rd  2012.  It’s been far too long Philly! We’ve missed you! Trapeze is back in action starting Friday, March 23rd with a soft opening, though we hope it won’t make you soft. Ladies, strap on your boots and hit the Puss N’ Boots party.

As the first night we are open in years, we are thanking our loyal members and VIPs with an invitation only party. This party is hosted by SDC’s very own Marie who will ensure all party goers have a fantastic time and get involved with her super contests including the infamous Cupid’s Couch Couples Game!

Trapeze Philadelphia is their 3rd lifestyle club to open becoming the sister club to Trapeze Atlanta and Trapeze Fort Lauderdale, here is what some of our members have to say about SDC nights at Trapeze Clubs!

Tuesday February 28, 2012 : by TANLINES1
SDC events at Trapeze are always a hit; atmosphere in the club was great, music as always great, food fabulous, club member hot and sexy.


Monday February 27, 2012: by DOUBLED3640
Are first visit to Trap and the SDC event was amazing. The place was slammed with "real" swingers. Great time.


Thursday February 02, 2012: by DANCERS3
As most SDC events at Trapeze, this one was another hit. The crowd was a great mix and a great crowd. The Lock & Key activity was a hit and very fun and successful and the best part of it was the organization by the SDC hostess, Marie. Trapeze members are already asking when the next one will be held.

Monday January 30, 2012: by FLTWO4FUN
The SDC Party at Trapeze was a marquee event, evident by the amount of young smokin hot sexy women there, a very friendly group, crowded but no problem getting around. Dance floor was fun, DJ kept the party rocking the best SDC Party to date. The new nonsmoking policy at Trapeze is a big hit. We walked out of club without red eyes, and happy, happy not to smell like an ashtray. J & R

Monday March 12, 2012: by LOLAGIRL
As always, this SDC theme night was awesome :) The music was extra groovy and the people were HOT!!! Until next time...

Saturday January 21, 2012: by JWH03
We love SDC nights because of the discounts and there are more people to participate. Love the newly remodeled club.

Monday January 16, 2012: by CATWOMAN3333
What great timing. It was my birthday and SDC was having a party at the trap. We met so many fun couples. We saw a lot of couples we knew. This was the largest crowd I have seen there. Can t wait to go back. 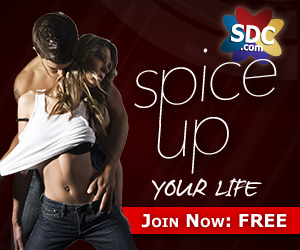